From many of the pictures in this exhibition, the vivisector's attitude of total contempt for the life, dignity and pain of the animals, their prisoners, is quite evident. Below are the feelings of a sensitive person having seen a film based on experiments on baboons.

"What really hurts in those images is not only their violence. What causes disgust and anger to me is something else. Something that cannot be ignored, seeing what they do to those monkeys.

Well, it is explained by the expressions of the vivisectors, their amused face; their lips are fixed, in my mind, in the attitude of laughing. Yes, those people were laughing. They were making fun of the terrible pain inflicted on those poor animals, caused directly by them.

They couldn't care less about all the pain they were causing, so that they could even laugh because of their very own stupidity, instead of commiserating with their victims for their unimaginable cruelty. Those people were laughing while they were smashing the skulls of beings incommensurably more sensitive and intelligent than themselves." 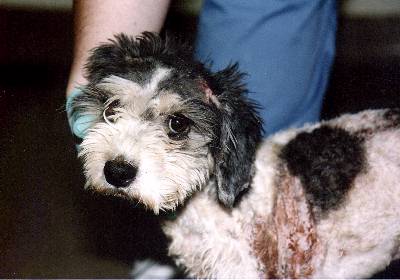 51. Picture taken by PETA activists during an inspection at the Wright State University.
Courtesy of PETA (1990's). 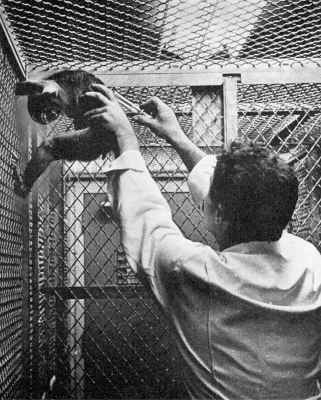 52. A vivisector injecting a large dose of morphine into a monkey during its abstinence delirium. The monkey became addicted to drugs due to forced exposure to them (University of Michigan, USA).
Photo drawn from: Annual Pictioral Review of the Scottish Society for the Prevention of Vivisection. (1950's - early 1970's). 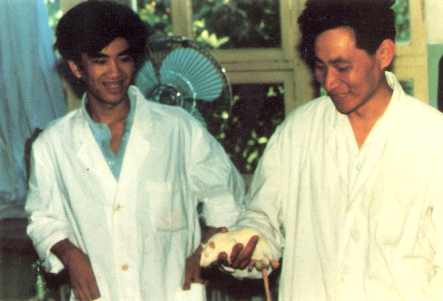 53. Vivisectors and rat: experimenting on rats must really be pleasant for those "gentlemen"...
(Unknown source).