"The only thing I care about, is whether the monkeys will show characteristics that I can publish. I never feel affection for them. I don't like animals at all. I despise cats. I hate dogs. How can you like monkeys?"
Prof. H. Harlow, one of the most famous vivisectors of non-human primates in the psychiatric research field, in an interview that appeared in the 27th October 1974 edition of the Pittsburgh Press Roto. Also quoted by H. Ruesch in "Slaughter of the Innocent", 1983, page 52.

"You have to know that there are thousands and thousands of primates being used yearly in all areas of biomedical research … I don't think we really want a policy statement that says that primates need to be set aside for moral reasons in xenotransplantation."
Dr. H. Auchincloss, talking at a N.I.H. conference on the Xeno-transplantations, on 21st January, 1998 in Bethesda, quoted in MRMC Report of March 1998.

"In addition, in Italy there are few centres that carry out experimentation on animals. So we have to boost it."
Prof. S. Garattini during the 4th December 1990 session of the Commissione Affari Sociali (Social Affairs Commission).

"In which fields are we in a position to reduce experimentation on animals? Frankly, I know none."
Prof. S. Garattini, ibidem.

"We approved a xenoperfusion protocol [passing of human blood through the circulatory system of an animal, to be then re-introduced into the human body] at my institute [University of Nebraska Medical Center] and, quite frankly, we didn't know what we were doing."
Dr. E. Prentice, talking at a N.I.H. conference on Xenotransplantations on 22nd January, 1998 in Bethesda, quoted in MRMC Report of March 1998. 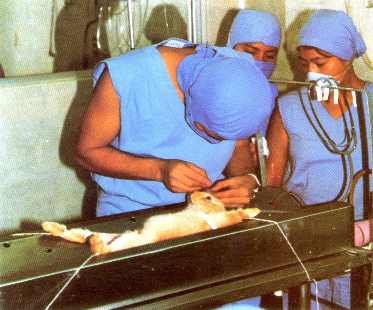 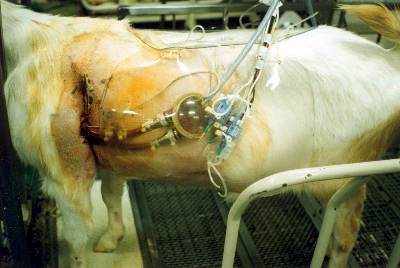 55. Goat during an experiment on a new prototype artificial heart. No animal species is spared from the torture of vivisection.
Photo obtained from BUAV (Japan - 1980's). 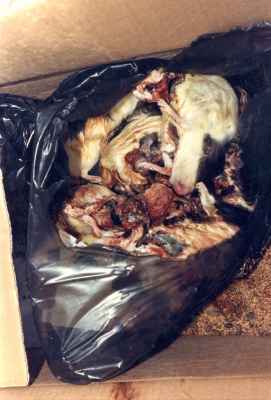 56. Bodies of animals submitted to vivisection: after being used in several experiments, the bodies of these animals are easily thrown away.
(Unknown source) 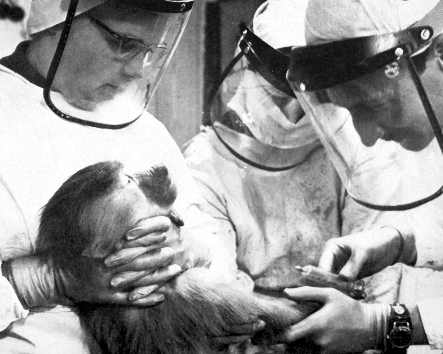 57. Monkey which has been inoculated with an experimental vaccine. (URSS)
Photo drawn from: Annual Pictioral Review of the Scottish Society for the Prevention of Vivisection. (1950's - early 1970's).

Previous panel How to set-up an exhibition