Every species of animal is biologically, physiologically, genetically and anatomically very different from the others, and extrapolation of data from one species to another is impossible.

Therefore, apart from the ethical aspect, we must consider the fact that experiments on animals are considered antiscientific by an ever-growing number of doctors who no longer accept the validity of vivisection as absolute gospel, but who are beginning to ask questions, and to answer them by opposing vivisection.

Experiments on animals do not bring us any real knowledge regarding the effects of the substance they are testing, because animals of different species, or even of different breeds of the same species, respond in various ways to a given stimulus, such as for example, the administration of a pharmaceutical product.

Here are some examples from the dozens and dozens to choose from: strychnine has no effect on guinea pigs, chickens and monkeys, when administered in doses which would send an entire human family into convulsions; insulin provokes malformations in hens, rabbits and rats, but nothing of the kind has been detected from it, in man.

Therefore, if the results obtained from a rat are different from those obtained from a cat, whose results will bear the greater similarity to the results on man, the rat's or the cat's? The answer is that it is impossible to know a priori. Only AFTER performing the experiment on man do we discover, case by case, which species and races results most resemble man's for THAT particular substance. 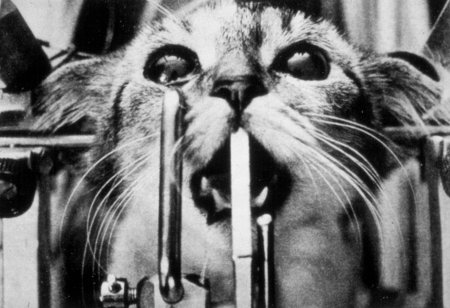 17. Experiment on the brain of a cat that has been immobilized in a restraining device.
(Source unknown)

18. Draize Test on rabbits in restraining devices (Liverpool, UK). The substance to be tested is poured into the rabbits' eyes and onto their skin, and left there for days until the organ becomes necrotic. This test was invented in 1944, and continues to be used, unaltered. It is one of the many demonstrations of how these practices are used purely due to inertia, because there is no real desire to evolve and use more moral and scientific methods.
Photo drawn from: Annual Pictorial Review of the Scottish Society for the Prevention of Vivisection (1950's - early 1970's) 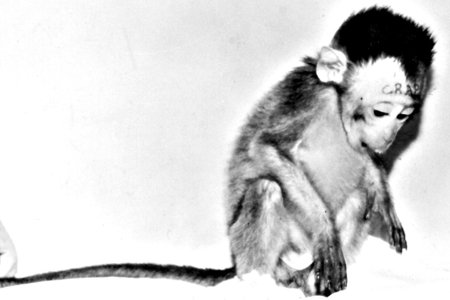 19. Monkey kept in England's Royal College of Surgeons. As can be seen, the experimenters have tattooed the word "CRAP" on the animal's forehead. Yet practitioners of vivisection assert that they love and respect the animals on which they experiment.
(Source unknown) 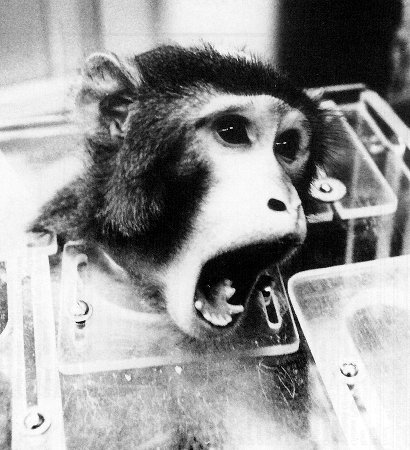 20. Monkey kept in a restraining device: non-human primates are often kept imprisoned for long periods in these devices without being able to move.
Photo taken from Stern Magazine (Era unknown) 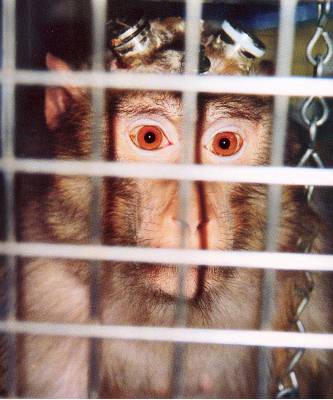 21. Macaque named Elisa, kept in the Institute of Neurology in London (UK). Electrodes, tubes and other metal devices are permanently attached to her skull.
Source: NAVS UK (mid 1990's)